Without exaggeration, Chinguetti is the heart of Mauritania. Not for nothing was the region in West Africa known for centuries simply as Bilad Shinqit. Once built as a fortified trading post (Arab. Ksar), it is now the No. 1 attraction in the entire country. In the middle of the Adrar region, Chinguetti is located south of its same-named plateau and 86 km east of Atar. It takes less than two hours to get from there to Chinguetti, and another two hours to Ouadane - the second and last world heritage site in the Adrar region. Although four times more people lived in Chinguetti during its heyday in the 13th century than today, the main sights have been preserved or restored. Of particular interest to visitors is a tour of the old town, which is separated from the more northerly modern city by an ouad. Here, Chinguetti's old mosque is particularly worth seeing, its striking sandstone minaret being reproduced in miniature thousands of times in Mauritania. ChingiTours was also inspired by it for its logo. The visitable local museums and libraries house exhibits and writings from millennia of history. In Mauritania, it is said that Chinguetti is the seventh holiest city in Islam. In any case, it is arguably the most culturally important city in the entire country, as well as its national symbol. 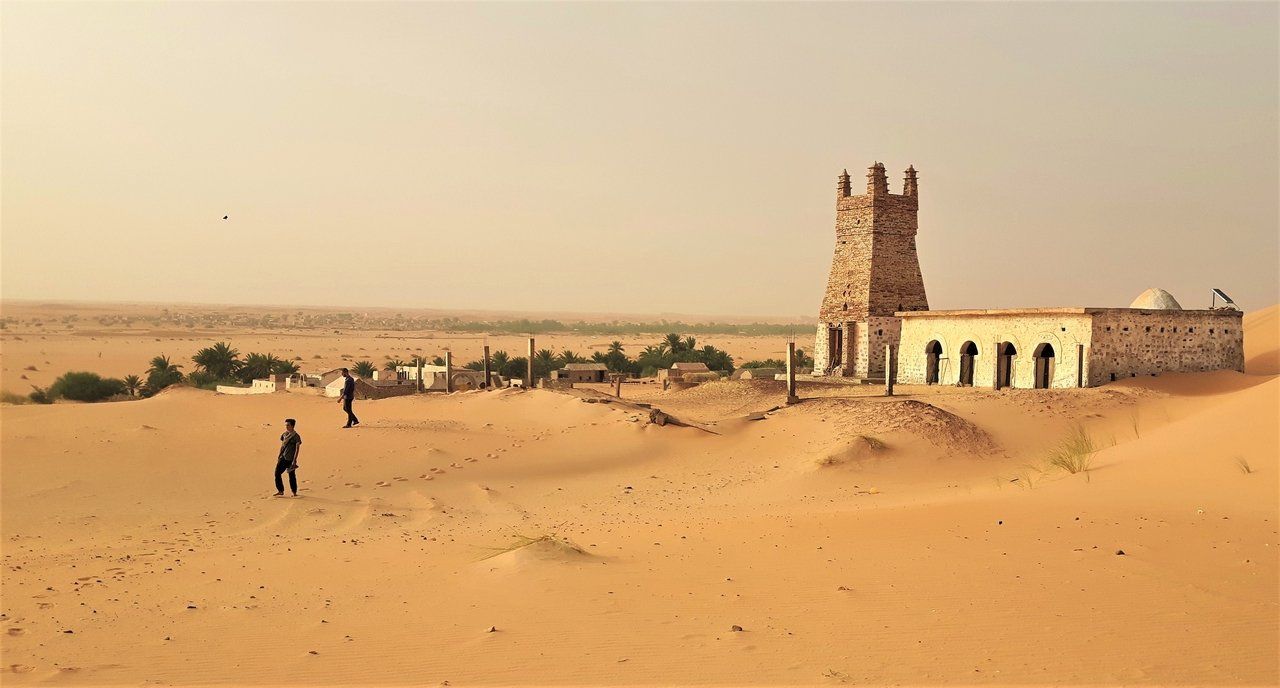 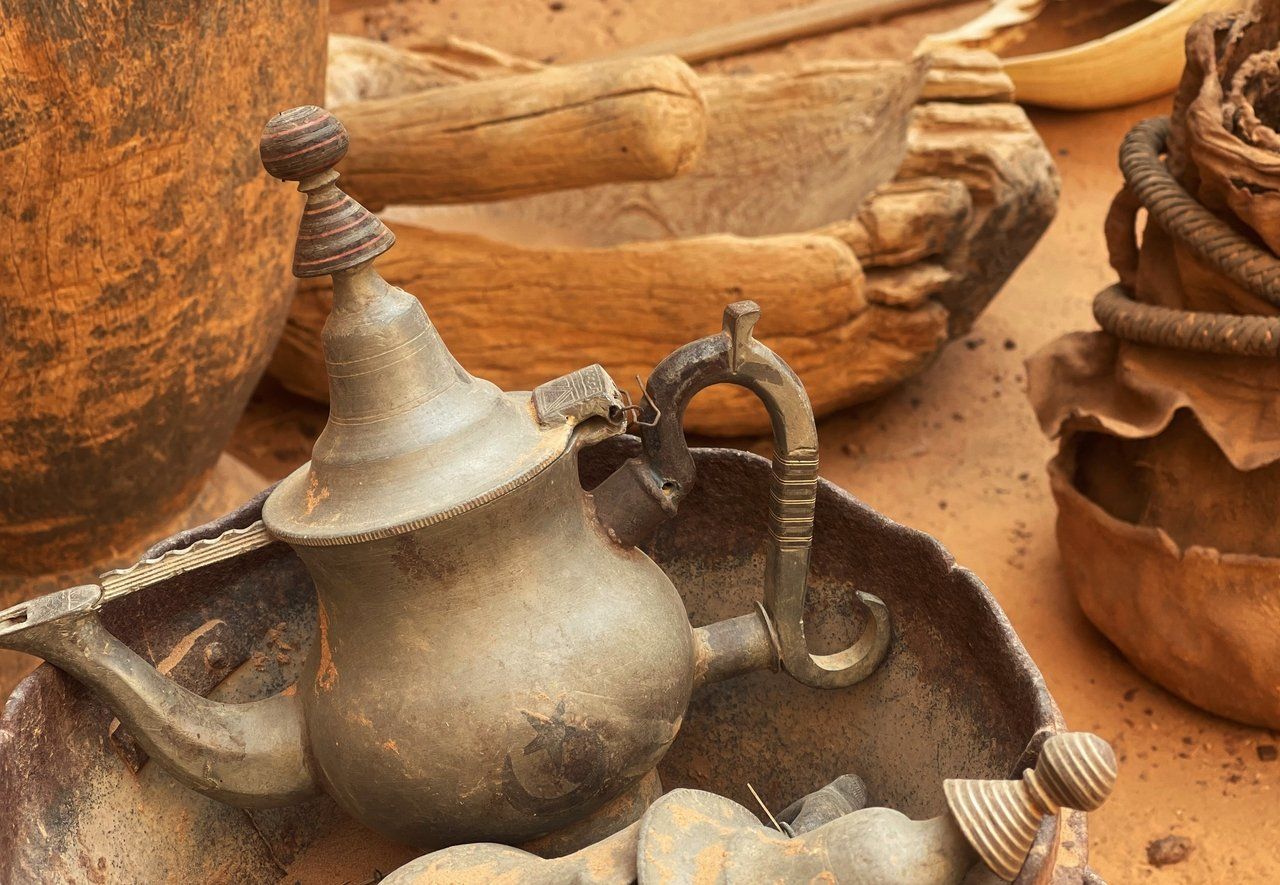 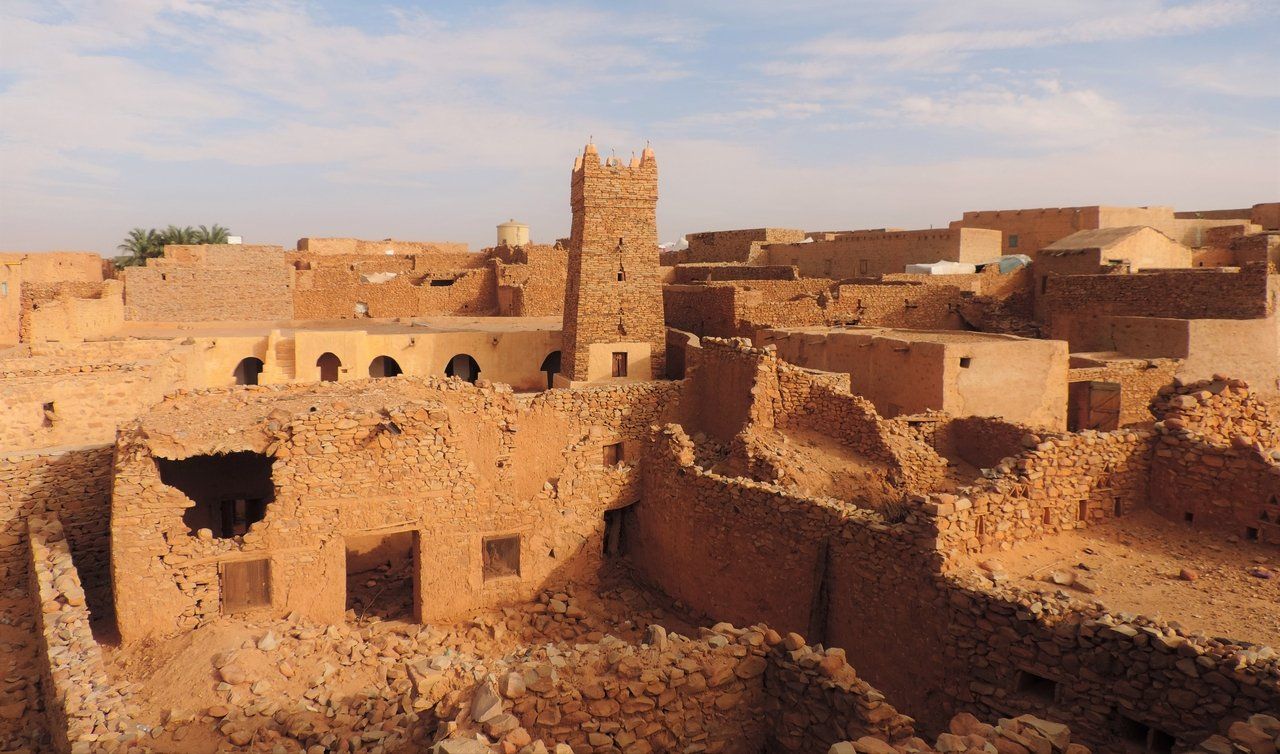 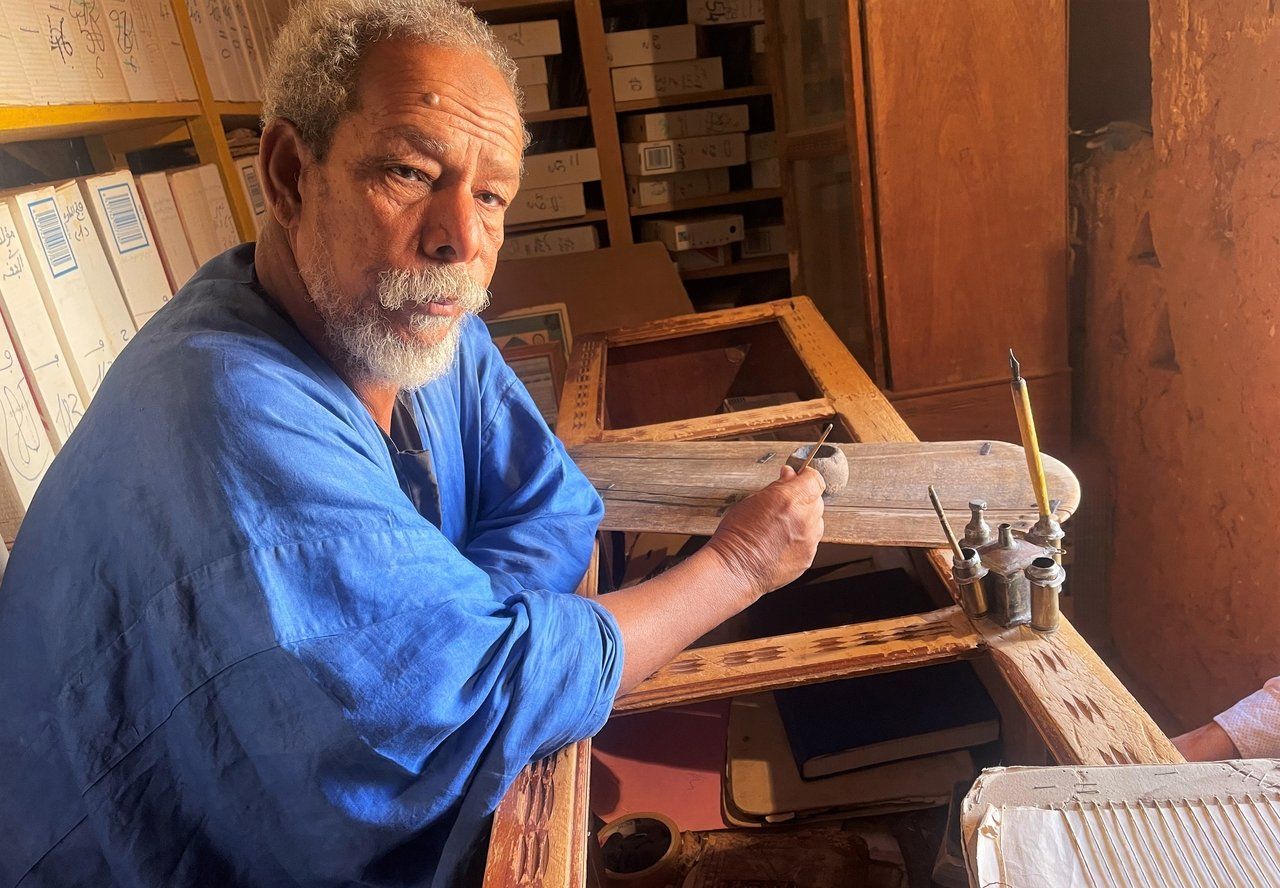 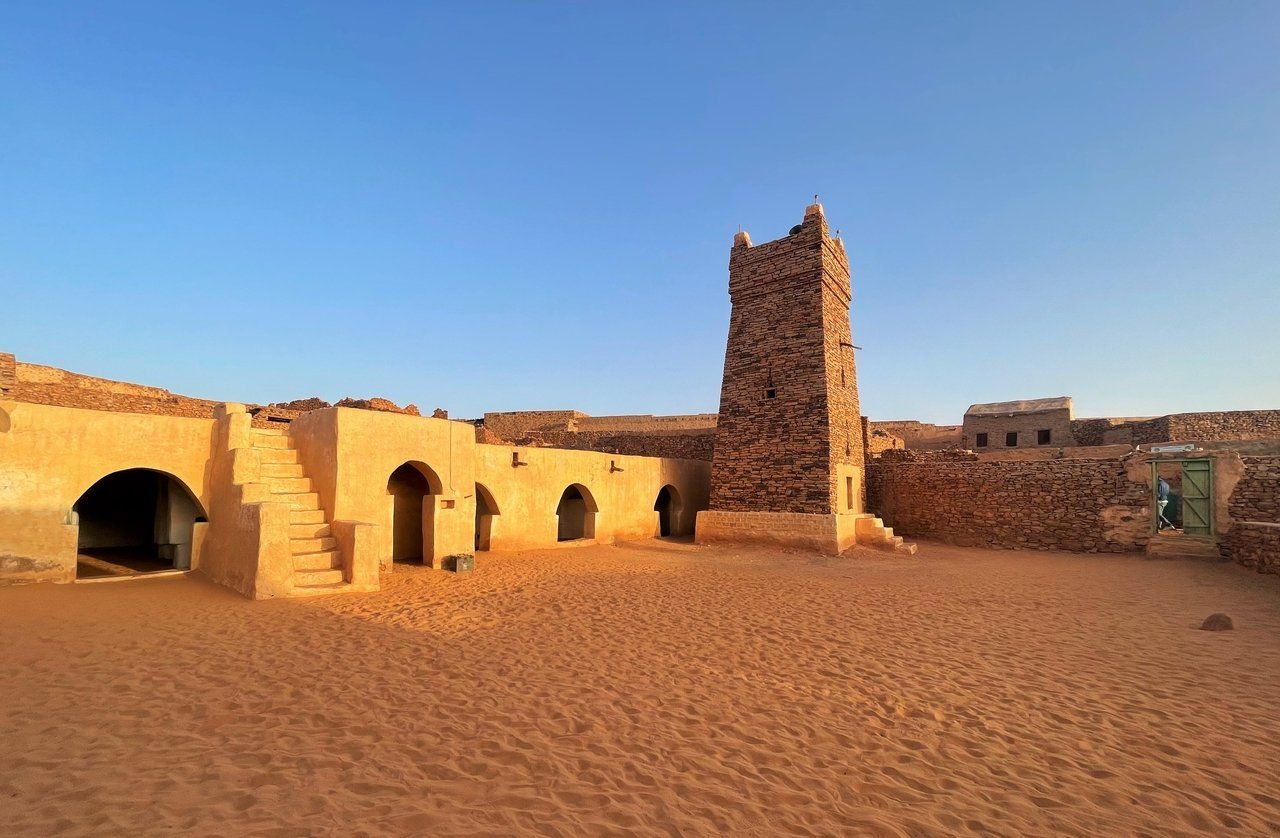 Chinguetti is a national symbol. The minaret of the old mosque, crowned with five ostrich eggs, is Mauritania's symbol and is found in miniature throughout the country, much like the Eiffel Tower in Paris. The remains of the former fortified trading post (Arabic: ksar, pl. ksour) of Chinguetti, along with those of Ouadane, Oualata and Tichitt, were inscribed on UNESCO's World Heritage List in 1996. Many visitors to Mauritania cannot decide whether they find Chinguetti, Ouadane or Oualata the most impressive: Mauritanians, however, have made their choice. Generally speaking, the Bilad Shinqit has the greatest significance of all cities for them.

From the origins to rise

The region of modern Chinguetti has been inhabited for thousands of years. The city itself was founded twice, first probably in the late 8th century as a trading post of the Sanhājah Berbers.  As an important part of the Trans-Sahara trade, the city flourished until the 11th century. Mostly salt, dates and gold were traded here. The city also made a name for itself as an important caravanserai. Up to 30000 camels are said to have been kept here. The name Chinguetti, by the way, can probably be traced back to the language of the Soninké and means well of the horses. It would therefore be much older than the city itself. From the 11th century on, Chinguetti lost its influence and could only regain its honorable place as a new foundation two centuries later. In its heyday, more than 20000 inhabitants lived in the city (today: 4500).

As a West African center for Islamic scholarship, there were 11 mosques and numerous libraries. The main mosque of Chinguetti, which is still visited today, was also built during this period. Its minaret is considered the second oldest in continuous use in the entire Islamic world. In the golden age of Islam, religious education was always taught together with scientific and rational disciplines: rhetoric, law, astronomy, mathematics and medicine were therefore also learnable in the heart of the Adrar. In Chinguetti, knowledge was not only passed on, but also preserved. Embedded in a professional trade and travel network, written documents from the entire Islamic world - and beyond - could be read, evaluated, discussed and copied here. To this end, the place served on the one hand as a starting point for hajj pilgrims and, on the other, became a pilgrimage site itself in view of the number of its scholars. It is not without reason that in West Africa Chinguetti is also referred to as the seventh holiest city of Islam. Even in the middle of the 20th century, it was by no means unusual to perform the hajj by camel. It takes about 6 months from Chinguetti to Mecca - and back.

Today Chinguetti is a kind of huge city museum, where there is much to discover. It is worth visiting the old town, including of course the mosque, where people still pray in the sand. The museum of the Ahmad Mahmoud family displays prehistoric and historical exhibits such as board games and lances, and also houses one of the most interesting libraries in the city. The tiny space contains countless intellectual treasures of centuries-old scholarship. The curator, Saif al-Islam, impressively recites poems from a wide variety of disciplines, explains the composition of classical ink, and knows every exhibit. No wonder he has already gained some notoriety in guidebooks and on the Internet. In Chinguetti, there are also traces of colonial heritage, such as the former fort of the French Foreign Legion (Légion étrangère). Near the mosque, a women's cooperative sells handmade souvenirs.

Modern Chinguetti and the old town are separated by a fastly traversable ouad (Arab. al-Wādī), in the sand of which boys can be seen playing football. It usually happens in the rainy season (June-October) that a lake temporarily appears in the ouad. Next to it there is a third Chinguetti, the most original of all three, which is a bit off the beaten track and today is just a village with a restored mosque in the middle of the sand dunes. The way is nevertheless worthwhile and can be mastered by camel as well as by 4x4 tour. There are also other things to discover in Chinguetti's surroundings. Most visitors are not aware that a few hundred meters south of the old town there is a mine from which cement (banco) was extracted for centuries. Access to this is provided via a well (!) and promises an exciting adventure of a special kind.

A city in danger

However, the city in the Adrar is endangered. In 2003, UNESCO funded a campaign to free the city, which is sinking into the sand. Nevertheless, the Sahara continues to spread slowly. Le sable mange tout - the sand eats everything. Added to this are the annual rains, which can also pose a danger - after all, the books and scrolls in the libraries are mostly stored unpreserved. The manuscripts are not digitized and would be irrecoverably lost to mankind if damaged. Thus, a visit to Chinguetti may not be something that can be realized in the distant future.

What we offer in Chinguetti

Because of its importance, versatility and beauty, Chinguetti is an absolute must for our tours to the Adrar region. In any case, we will determine the program and the length of stay together with you. Many things are possible: as once to distant destinations such as Timbuktu or even Mecca, the city can still serve as a starting point for camel tours. The oases of Entkemkent or Lagueila as a trip of several hours or a multi-day trip to Ouadane - everything is feasible. On the other hand, if you prefer a modern "camel", you might find a 4x4 trip appealing. With us any kind of tour to Chinguetti can be realized.

Does Chinguetti change with the seasons?
Indeed, yes. For example, after the rainy season, the ouad that separates modern Chinguetti from the old town may become a lake and thus difficult to pass.
Is Chinguetti worth it even for two nights?
Absolutely. The city itself, as well as the surrounding countryside, offers many opportunities for discovery.
What kind of camel trips can be organized in Chinguetti?
We offer camel trekking in different lengths from Chinguetti. Short trips to the oasis Entkemkemt or the "third" Chinguetti are possible as well as trips of several days to Terjit or Ouadane. The right planning is everything!
Is Chinguetti really the seventh holiest city in Islam?
Well, many Mauritanians would answer "yes" to that question. In fact, the site in the Adrar is one of the most religiously significant in West Africa. However, there are many places in the Islamic world that claim a place next to Mecca, Medina and Jerusalem. At least there is agreement on these three. But whether Damascus, Baghdad, Cairo, Karbala, Najaf, Kairouan, Timbuktu, Bukhara or Chinguetti may count themselves among the top 7 is nowhere determined in a binding way.