From Barbarians and Moors

Mauritanians are Barbarians. At least in linguistic terms. Maybe, just a little. Well, one after the other...
Mauritania, the land of the Moors, existed twice in history. First as an ancient region in the Maghreb, which was initially a Berber kingdom and later became a Roman province. The term Moor once referred to what we now understand as Berber, which means some peoples of North Africa. Berber comes from the Greek bárbaros (non-Greek), Moor however from the Greek mauros (dark). But the fact that today´s Mauritania doesn't even border on the ancient one doesn't make things any easier, does it? Sometimes, terms change their meanings. In any case, Berbers are no longer understood as barbarians. And the Moors who live in modern-day Mauritania are called Bidhani (whites), a complete reversal of the original Greek meaning. This can be seen, among other things, in the word Moor, which comes from mauros and - now obsolete - once referred to people with black skin. Complicated enough? Let's not even get started on Mauritius. 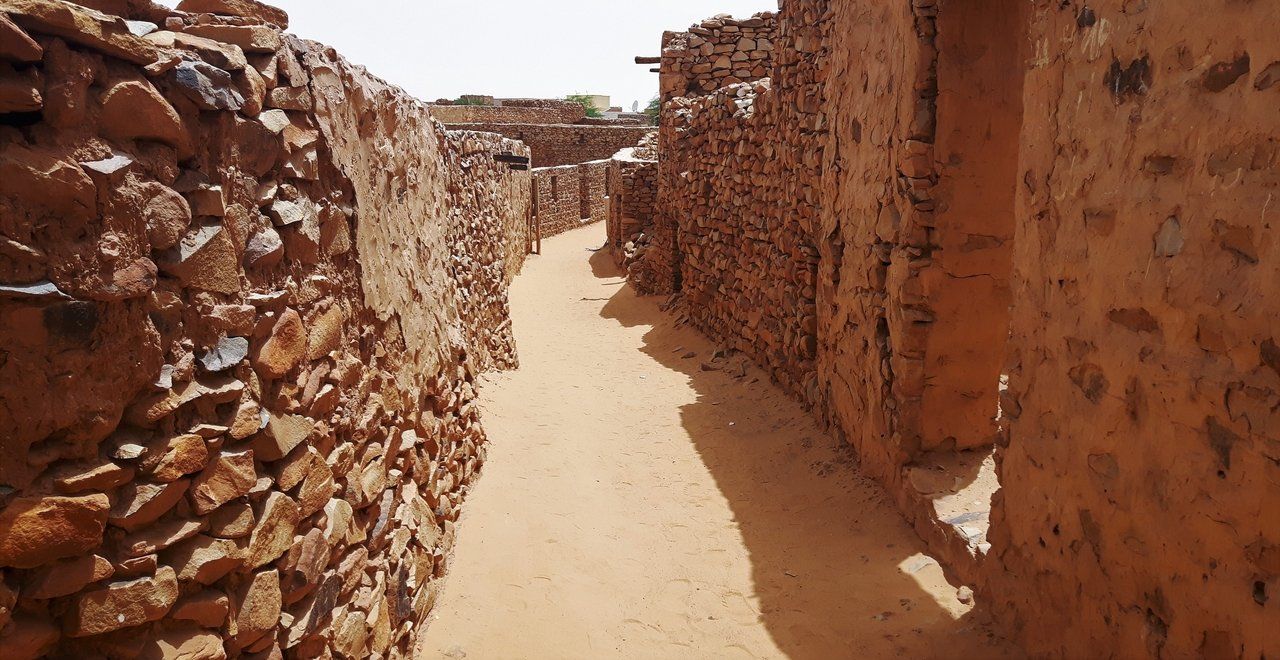 The history of Mauritania begins even before the emergence of Homo sapiens. Tools discovered in the last decades testify to settlement activities on site since the Paleolithic Age. However, the living conditions in West Africa were by no means constant over the last 200,000 years. For a long time vast pastures characterized what are now endless sand dunes.
Among the first people to settle in what is now Mauritania were the Bafur, a nation of farmers and ethnic ancestors of the Soninké and Imraguen peoples who still exist today. Severe desertification around 4000 BC caused these people to largely migrate south (Soninké) or to the coast (Imraguen). From the 3rd century A.D. onwards, settlement by Sanhādscha-Berber followed, whose strong interconnectedness with their area of origin in the Maghreb made trade and cultural exchange possible in the first place. This was also made possible by the spread of domesticated dromedaries at that time, which today are considered the epitome of caravans and nomadism.

At this point in time, a phenomenon can already be recognized that would intensify in the following centuries and continue to this day: Mauritania´s position as a link between Berber-Maghrebian (later Arab) and black African influences. Southeastern Mauritania fell to the Ghana Empire from the 9th century, Koumbi Saleh became the capital. The nearby Audaghost also flourished for the first time. Whether the empire between the Senegal and Niger rivers was an area ruled by Berbers or Soninké is a matter of dispute today. Coming from the north, the Almoravids (from Arabic: al-Murābiṭūn), now an Islamic Berber dynasty, brought from the second half of the 11th century in its wake not only the creeping disintegration of the Ghana Empire but also Islam. The question of cultural affiliation seemed to be answered for the time being - until 1147, the peoples between the Senegal River and al-Andalus (today's Spain) lived under common Muslim rule. The founding and rise of Chinguetti and Ouadane also occurred during this period. All of Mauritania was at times just called Bilad Shinqit in the Arab world. However, one should not be deceived by maps and numbers: The Arab-Berber Bidhani (also: Baiḍānī from Arab. abyaḍ, white) formed the upper class of merchants, clergy and rulers for a long time, but numerically remained a smaller elite, just as Islam initially remained closed to larger parts of the population. Incidentally, it was no different with the later appearing Arabic language. Furthermore, the trans-Saharan trade at that time extended from the Malian Djenné via the Mauritanian Aoudaghost to Tunis - so there was hardly any cultural affiliation with one or the other.

Richest man in the world

After the disintegration of the Almoravid empire, the Berber successor dynasty of the Almohads focused more on the Maghreb and al-Andalus and less on the territories in the south from the 12th century onward. The following Merinids, Wattasids, Saadians and Alawids were also never again to rule the Bilād Šinqīṭ. Instead, the entire region between Timbuktu and the Atlantic was under the joint rule of the Mali Empire from the 11th century onward. This kingdom is still considered one of the most successful symbioses of Islam and black African culture. Ksar Oualata in particular benefited from this expansion. It is said of King Mansa Mūsā that he passed a few days in Cairo during a hajj (Ḥaǧǧ) in 1324 and spent so much gold there that it took the price of gold 12 years to recover. No wonder, then, that the richest man in the world at the time even made it onto the Catalan World Atlas, even though it was not drawn until four decades after his death and in faraway Europe to boot. However, the Mali Empire also fell apart and was followed by the Songhai Empire, which existed for two centuries until the arrival of the Europeans. This empire stretched from Agadez in today's Niger to Senegal and is considered one of the largest African empires in history. The territory of Mauritania, however, was - with the exception of Oualata - less culturally influenced by it than in the times of Mali.

Europe did not appear in Mauritania until the middle of the 15th century, and initially as a trading partner. The coveted gum arabic, obtained from the sap of the acacia tree, first attracted the Portuguese, who established a trading post on the island of Arguin. In exchange for firearms, textiles and some crops (e.g. corn), gold and slaves were traded in addition to the gum. While slavery in the Arab world originated in pre-Islamic times and was not unknown in large parts of black Africa, colonization opened a completely new chapter in this dark book. The possibilities of seafaring and the need in the overseas American colonies for labor "required" a sort of industrial implementation of enslavement and transportation. This triangular trade that took place between the Americas, Europe, and West Africa stretched from Senegal to Angola. Besides Portugal, other European powers were also interested in trade with West Africa and initially established their outposts limited to the coast, such as France in St. Louis (Senegal) in 1659. It was not until the 19th century that France began to occupy parts of Senegal and Algeria in the context of the colonial scramble for Africa. Mauritania was finally colonized in 1904, presumably to unify France's North and West African possessions. Final rebellions were not suppressed until the 1930s. Mauritania's colonization history therefore remained comparatively short until independence in 1960, but French influence on culture and politics was immense. Mauritanian soldiers also gained experience as so-called tirailleurs sénégalais (Senegalese riflemen) on the French side in two world wars.

Since its independence, Mauritania has gone through various political phases. The autocratic rule of Moktar Ould Daddah (1961-1978) was initially marked by a struggle against Morocco's claim to Mauritania. The northern neighbor did not recognize Mauritania as an independent state for over a decade due to their common history. Finally, in the 1970s, the war in the Western Sahara and the occuring droughts led to Daddah's political end. In 1978 he was deposed by the military, and a year later Mauritania renounced all claims in the Western Sahara. After further bloodless coups (1979, 1980, 1981, 1984), the rule stabilized only under Maaouya Ould Taya, who ruled for more than two decades until 2005, before he himself became the victim of a coup during a trip abroad. Under Taya, the second presidential elections in Mauritania's history took place after more than 30 years (1992). This was followed by another coup in 2008, until finally presidential elections were held regularly in 2009, 2014, and most recently in 2019. Despite the same number of coups and elections in the country's history (eight each) and a full four constitutions, recent years show that a more democratic and stable future for the country is possible: for example, in 2019, a conflict-free transfer of power succeeded for the first time-from Ould Abdel Aziz to Mohamed Ghazwani.

Tourism, which did not restart until the early 2000s, experienced a temporary halt due to the activities of the al-Qaeda terrorist organization in the Maghreb. In the last decade, however, the security situation has improved significantly and Mauritania has once again become a destination for explorers and is now enjoying increasing popularity - even in pandemic times. This comes as little surprise to us, as the country still offers one of the last exotic spots on earth. It is to be expected that tourism will increase strongly in the coming years.

Like the rest of the world, Mauritania is affected by the pandemic that has been rampant since 2020. Travel to Mauritania is nevertheless possible. Up-to-date information is available on our FAQ page.
Learn more