Like Mauritanian history, the cuisine is marked by diverse influences. To put it simply: a little Maghreb, a little Mali, a little France and Senegal. The food is eaten without cutlery, on the floor and together in a group - of course, there is always a piece of white bread in your hand. Dinner for One? Never. Food is very important in the tradition as a unifying social element. It is by no means unusual for everyone to eat from one large bowl.
Anyone expecting the diversity of Moroccan cuisine will quickly be disappointed in the country's southern neighbor. Mauritania's menu is limited despite its diverse character. The typical fruit and vegetable stands on the street corner usually offer exactly the same goods: apples, bananas, oranges, nectarines, watermelon and honeydew melon, tomato, zucchini and, of course, dates. Dates are one of the few remaining fruits produced in the country and are even exported. The main regions of cultivation are Atar and Tidjikja. The date is served as a snack with practically every meal.
The largest variety is still found in the coastal region, where fish in various forms is one of the main dishes. With luck, fish can also be eaten in Chinguetti, Atar or Tidjikja, but the transport there is expensive. And so the desert's offerings remain rather nomadic.

The most famous fish dish is Maru Hout, also known as Thieboudienne (French) and Ceebu Jën (Wolof). Maru Hout is eaten by all Mauritanians, but is more culturally associated with the Soudans population, who traditionally dominate fishing. No wonder, then, that Ceebu Jën is also one of the national dishes in Senegal. For Maru Hout, which translates simply as rice and fish, a variety of fish species can be used. However, the most common is dorado, which is first stuffed with a mixture of herbs for preparation. Basically, a plate of Maru Hout is always a wild potpourri of onions, carrots, tomatoes, potatoes and all sorts of vegetables.

Since Mauritanians often eat meat and like to eat rice, it is not surprising that Maru Diuk (rice and chicken) is also one of the most popular dishes. In addition, beef, goat, sheep and sometimes camel meat can be found on the plate. Instead of rice, couscous is also a popular ingredient.
Tajine is not all that different in composition, yet it is clearly more Maghrebian in character. Prepared in the distinctive domed tajine pot, the dish always consists of onions, meat and potatoes, and often other vegetables.

In the course of colonization, French dishes have also found their way into Mauritanian cuisine. Croissants are a popular part of breakfast, crêpes can be eaten sweet or savory in combination with other dishes. Despite all the limitations, the influences can also be combined well: Crêpes with couscous and tajine are not uncommon.
Of course, you can also eat modern food in Mauritania. Those who prefer burgers, pizza and pasta will get their money's worth in all the larger cities. The Lebanese and Syrian restaurants in Nouakchott and Nouadhibou are also interesting from a culinary point of view. 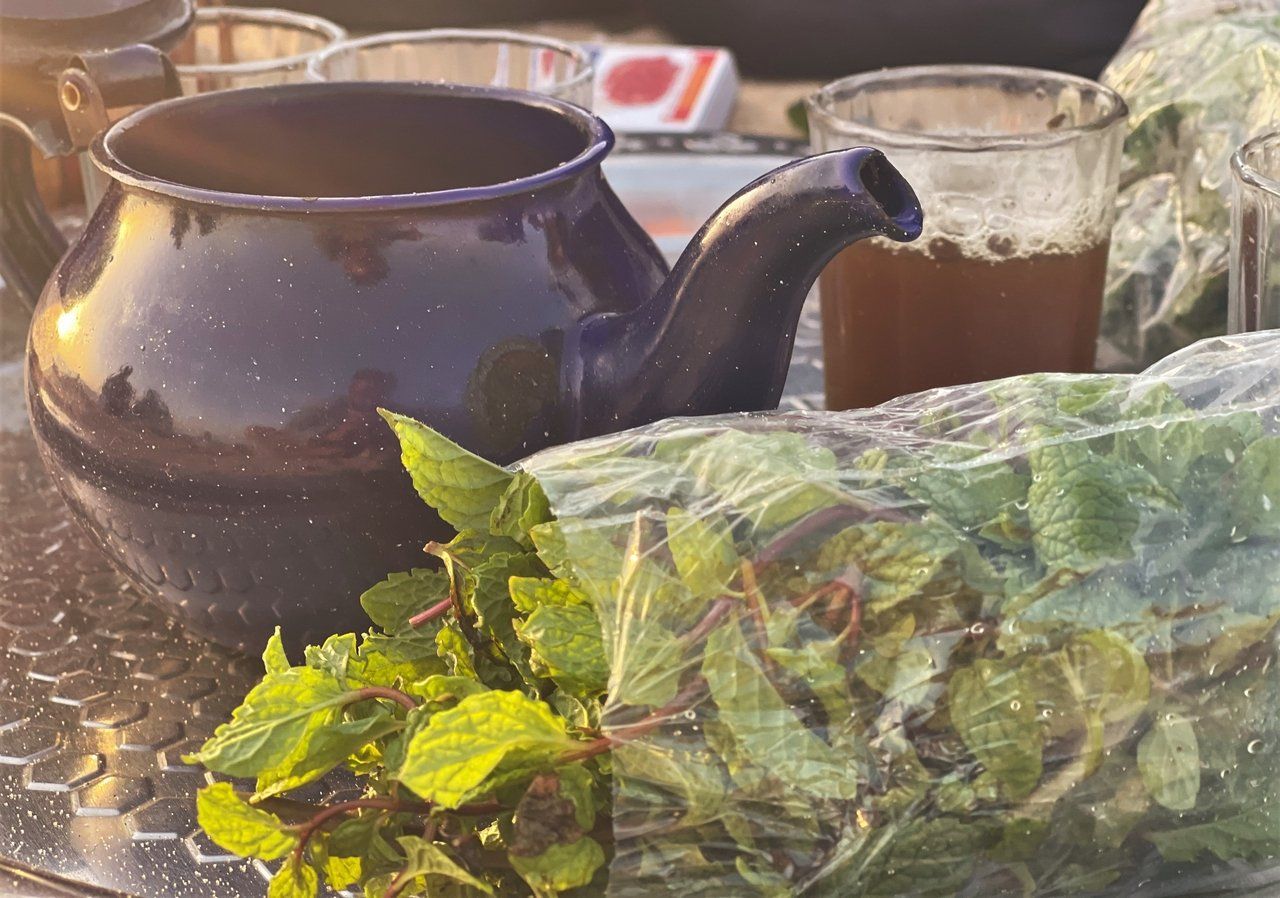 Now, in a country so characterized by heat and sand, drinking takes on a special significance. Tea plays such a decisive role that it is impossible to imagine daily society without it. It has become a national symbol and it is hard to imagine that it was only introduced from Morocco at the end of the 19th century. Mauritanians have internalized and perfected the tea tradition. At the same time, good tea is a highly sugared status symbol and its proper preparation is both a craft and an art. A skilled tea maker can almost be compared to a bartender juggling bottles to impress his guests. With tea, there are important conventions. Has the tea maker created enough foam? Who is offered the first glass? Does he clean the glasses after each round? And above all, one always drinks three glasses. An important Mauritanian proverb: "The first glass is bitter as life, the second strong as love, and the third gentle as death."

The refreshment equivalent of tea, by the way, is zrig, which in the interior of the country even Coca Cola has not yet overtaken. This highly diluted and sweetened milk of various animal origins is ideal after a hot day in the desert and is also preferably consumed in the community.

Are the land routes from Morocco and Senegal to Mauritania currently open? Which airlines fly to the country in Corona times? We answer these and other questions in our FAQ.
Learn more