Part of the Arab world...

Afrirabia. There is no other country where Arab and African influences meet like in the country between Senegal and Algeria. A walk through the weekly market in Nouakchott therefore always feels a bit like Dakhla and a bit like Dakar. Centuries of history in the sphere of influence of West African and Maghreb empires have left their mark. As a matter of course, Hassaniya is heard in the streets of Nouadhibou, Atar and Tidjikja alongside Wolof, Pulaar, Soninke and the former colonial language French.

Mauritania means land of the Moors. Although the Moor, which is no longer in use today, is derived from the Greek mauros and has for centuries primarily referred to people of black African origin, the Moors of Arabic-Berber descent in Mauritania are called Bidhan (from Arabic abyad, white). To identify this as a visually homogeneous group does not do justice to the often complex ethnic affiliations. Among the estimated 30 % Bidhan in Mauritania, there are also blacks. The native language of the Bidhan is Mauritanian Arabic, Hassaniya. Their cultural reference is the Arab world, especially the greater Maghreb region. Since the Bidhan have always formed the political elite in Mauritania, it is no surprise that this orientation has also taken on international political dimensions. Since 1989, for example, Mauritania has been a member of the Arab Maghreb Union. Historically, the Soudans, part of the black population, have always been more closely associated with the French language than the Bidhan. Although there are still many among the latter who do not speak French at all, this number has been declining steadily for decades.

...and part of Africa 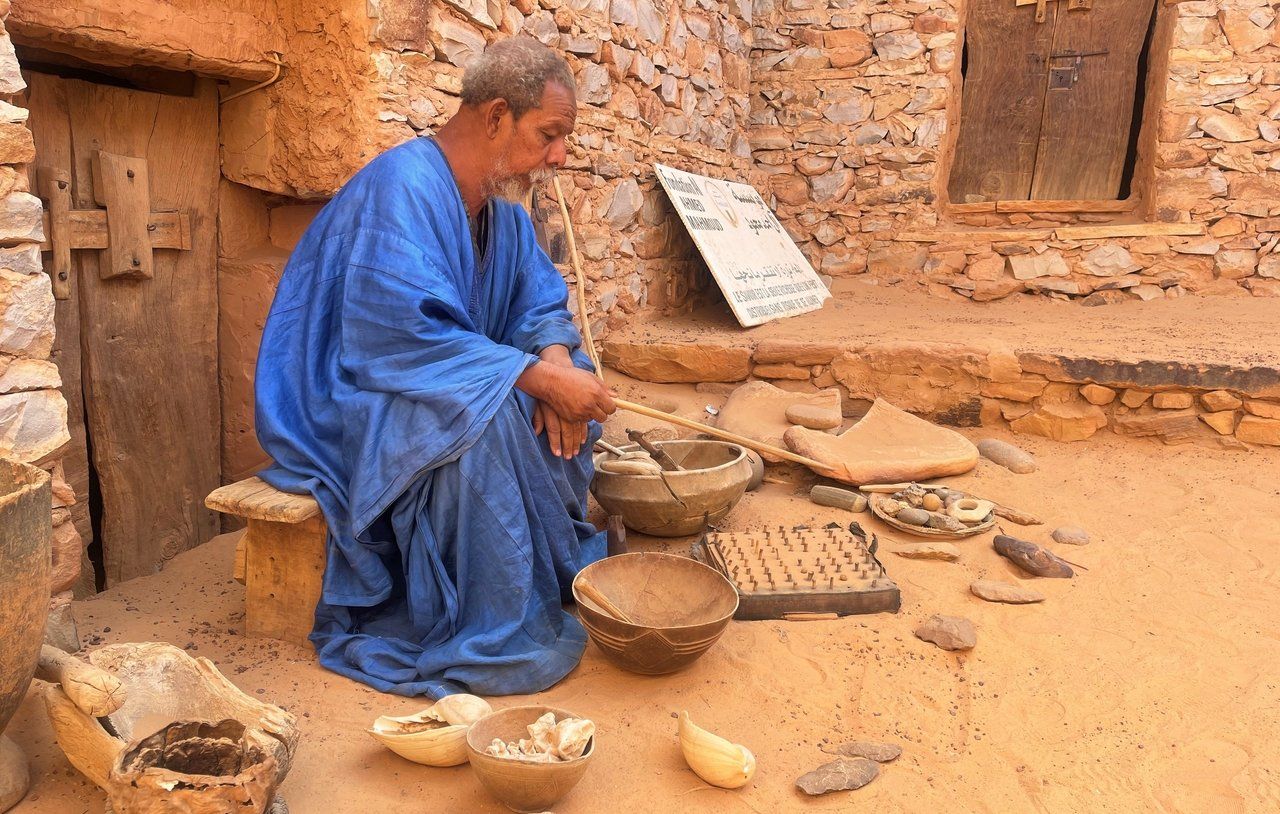 Tribalism is most pronounced among this population group. Traditionally, these affiliations are linked to occupational groups that enjoy varying degrees of prestige in society. If someone comes from the Zāwiya circles, for example, he is considered a religious scholar (ālim, pl. Ulamā). The Laqlan, on the other hand, are known as warriors. The Muallimin are the craftsmen, and the Igawwin come from the West African griot tradition and are considered gifted musicians. Dimi Mint Abba was an Igawwin and, as a traditional singer, in the course of her life became a national symbol of which there is no second. The fact that tribal affiliation is still a fundamental part of social identity today is shown by the fact that those who make music often do not want to be filmed doing so. Videos of Ed Sheeran covers, for example, are only sent to covered faces. So the laughing smiley that hides the face does have a serious meaning. Only the Igawwin have the role of musicians. Some Bidhani families have achieved great power and fame in history. The Kunta, for example, a Moorish tribal group, were particularly influential economically and religiously and produced some of the most famous Mauritanian scholars.

In addition, there are the Haratin (from Arabic hurr, free), the descendants of former slaves. They make up about 40 % of the total population. Although of black skin color, Hassaniya has also become their mother tongue over the centuries due to cultural ties with their former owners. Slavery, however, is not a distant relic of Almoravidian days in Mauritania, but was abolished only in 1981 and made a punishable offense in 2007. Especially far away from the big cities, former slaves still live with their former "owners" due to lasting economic dependence. The development is clearly moving in a positive direction, but it will take generations to break antiquated traditions and overcome dependencies. Slavery is a taboo subject in Mauritania. The Bidhan and Haratin live all over the country, but are rarely found in the extreme south.

The third large group in society (about 30 %) are the Soudans (from Arab. sudān, black), who are in turn divided into five ethnic groups. Basically, Soudans does not denote a real ethnicity, but only the linguistic and cultural distinction from the Hassaniya speakers. They are culturally and linguistically diverse. The Tukulor speak Pulaar, the Soninké Soninke, the Wolof Wolof, the Bambara Bambara and the Fulbe Fulfulde. The first three groups are the largest in number. The lingua franca of all five groups is French, which allows them to overcome linguistic barriers among themselves and thus contributes significantly to a collective identity. Just as the Bidhani traditionally consider themselves part of the Arab world, the Soudans often see themselves as having the strongest ties to neighboring black African countries, especially Senegal. Different linguistic and ethnic affiliations have already led to considerable problems in the past (1989/90). However, even if some of the conflicts of the past have not yet been resolved, enormous progress has been made. At any rate, the days of border conflicts and paramilitary associations for the liberation of blacks in Mauritania seem to be over. The Soudans are found primarily in the south of the country in the area of the Senegal River, although people are also drawn to the larger cities such as Nouakchott, Nouadhibou and Zouérat for work.

In addition to these three major population groups, Mauritania is also home to a number of refugees from Mali. Some gastronomies are run by Syrians and Lebanese who have lived in the country for a few years to decades. Chinese influence in Mauritania is enormous and is evident not only in the large number of Chinese in the capital (about 2,000), who are often diplomats or businessmen. Important companies are also in Chinese hands. Chinese stores can be found in most of Mauritania's larger cities. 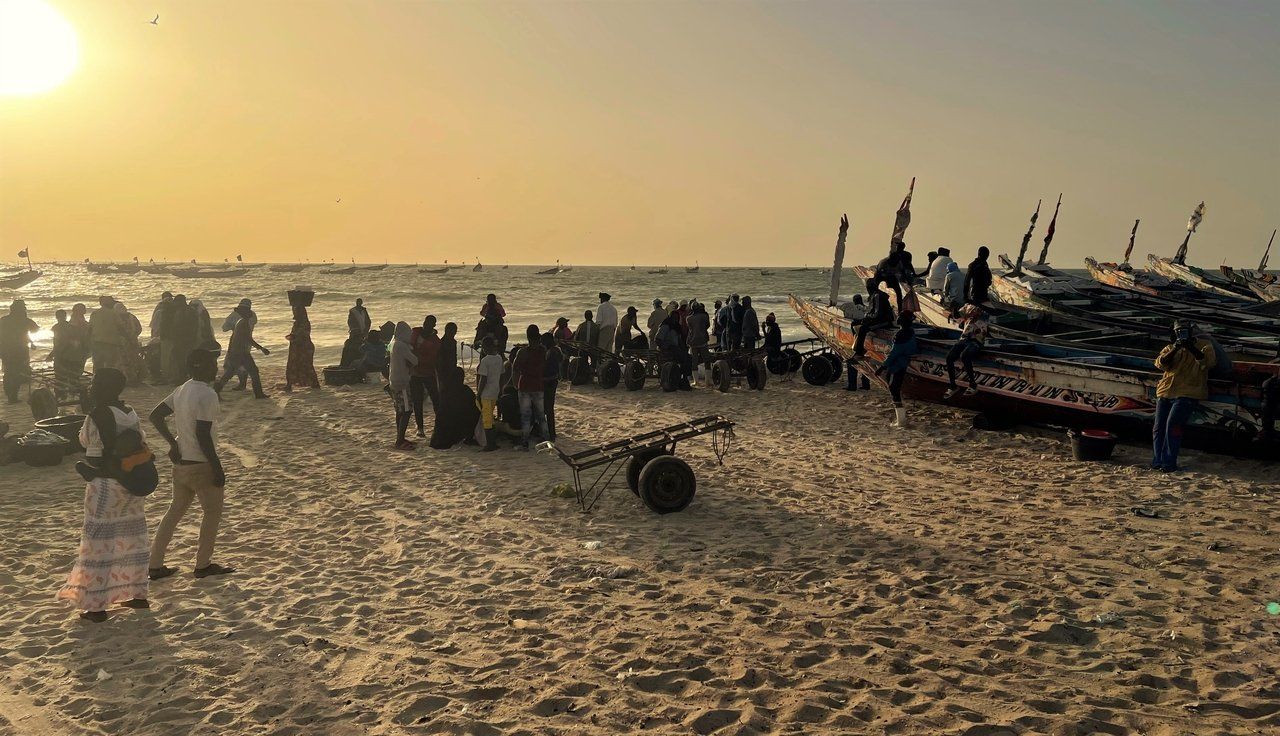 In such a heterogeneous society, there needs to be a cement that holds it together. In Bilad Shinqit, that is Islam. Sunni, Malikite, strongly Sufi influenced. More than 99 % of the population is Muslim; Islam is the state religion and deeply anchored in society. Mauritania is still known for its scholarship, and religious knowledge - even among ordinary people - is very strong compared to other Arab states. As the first - and for many the only - place of learning, the Mahdara assumes a prominent role in the field of education. Merchants praying together in public, full mosques, and men and women rolling out their prayer rugs are a common sight. This piety undoubtedly represents the greatest opportunity for collective identity for an entire society.

The beauty of Adrar

The Adrar Plateau is the most sought-after destination for visitors to Mauritania and is embedded in four of our tours. Ouadane, Chinguetti, Terjit and finally a train ride to Nouadhibou are on the varied program.
Learn more