Ouadane, along with Chinguetti, is one of the most culturally and historically important cities in the Adrar region. The city was built uphill along the Adrar plateau. Nowhere else in Mauritania do the ruins of the old city extend over such an extensive area as here. It is therefore not without reason that the ksar is a UNESCO World Heritage Site, along with Chinguetti, Oualata and Tichitt. As an important trading post of the Trans-Sahara trade and at the same time center of date cultivation in the Adrar, the city was of far transregional importance in the 13th and 14th centuries. Located at the foot of the eastern plateau, Ouadane can be reached from Chinguetti within 2 hours. The city is worth a day trip including an overnight stay. In addition to the old town, which is well worth seeing, including its partially restored mosque and the houses of the town's founders, we recommend a visit to the date oasis and an excursion to Guilb er Richat, only 25 km away. This rock formation is visible even from the moon and already the drive there becomes an adventurous experience. Furthermore, a visit to the city museum is also worth the trip. There is also the possibility to take the way from Chinguetti to Ouadane (or vice versa) over Tanouchert oasis by avoiding asphalt roads. A little detour, but a lot of gain. Camel tours can also be easily organized from the 3500-inhabitant town of Ouadane. 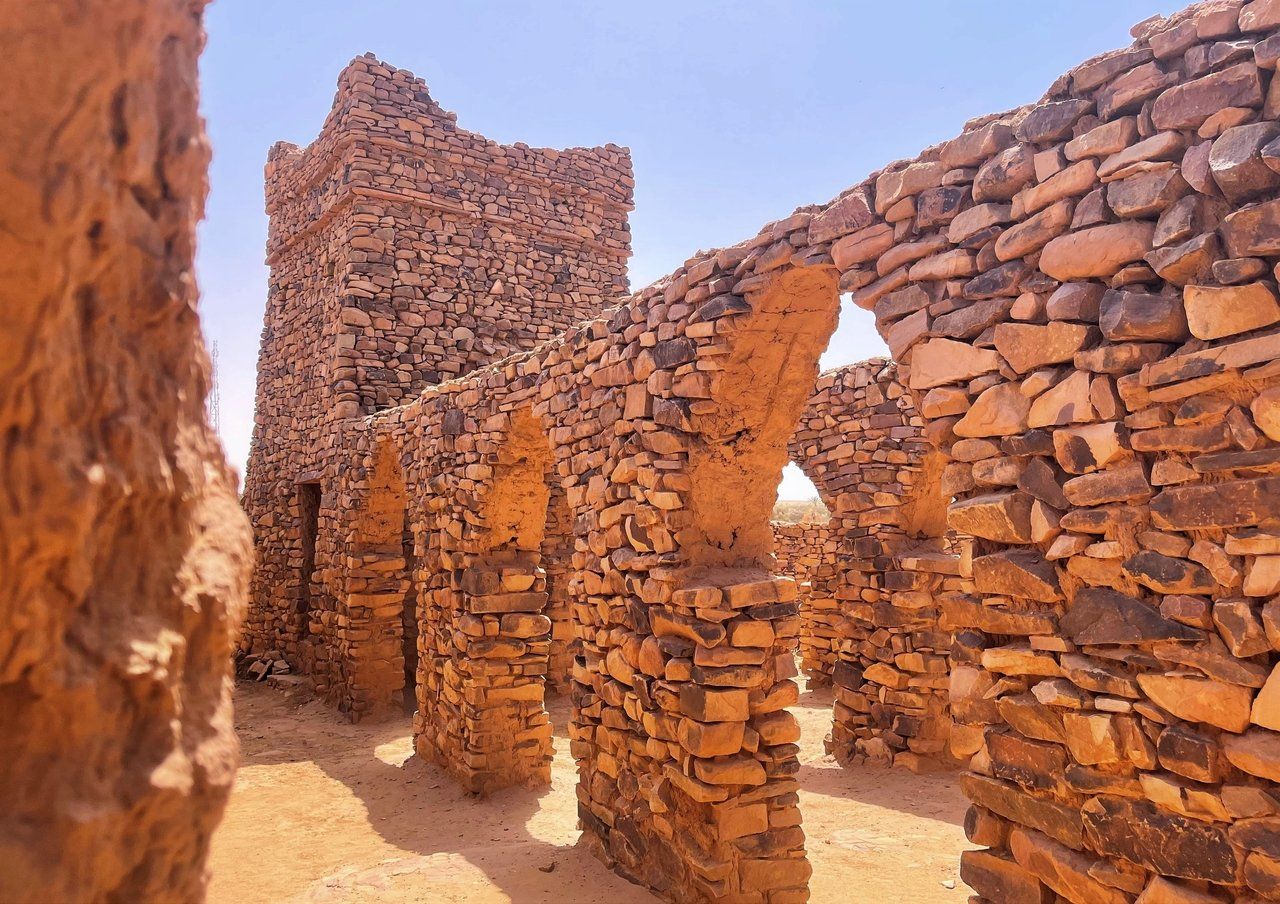 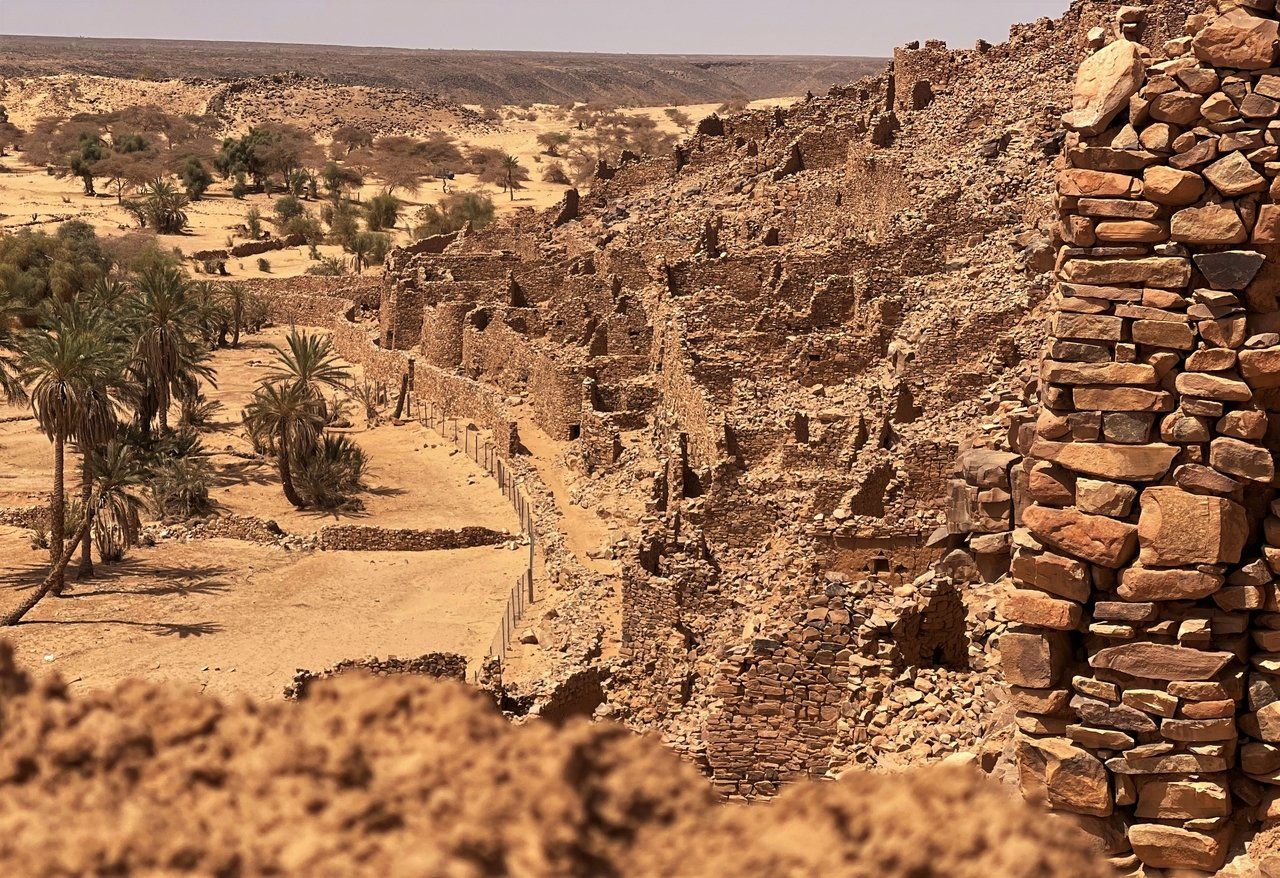 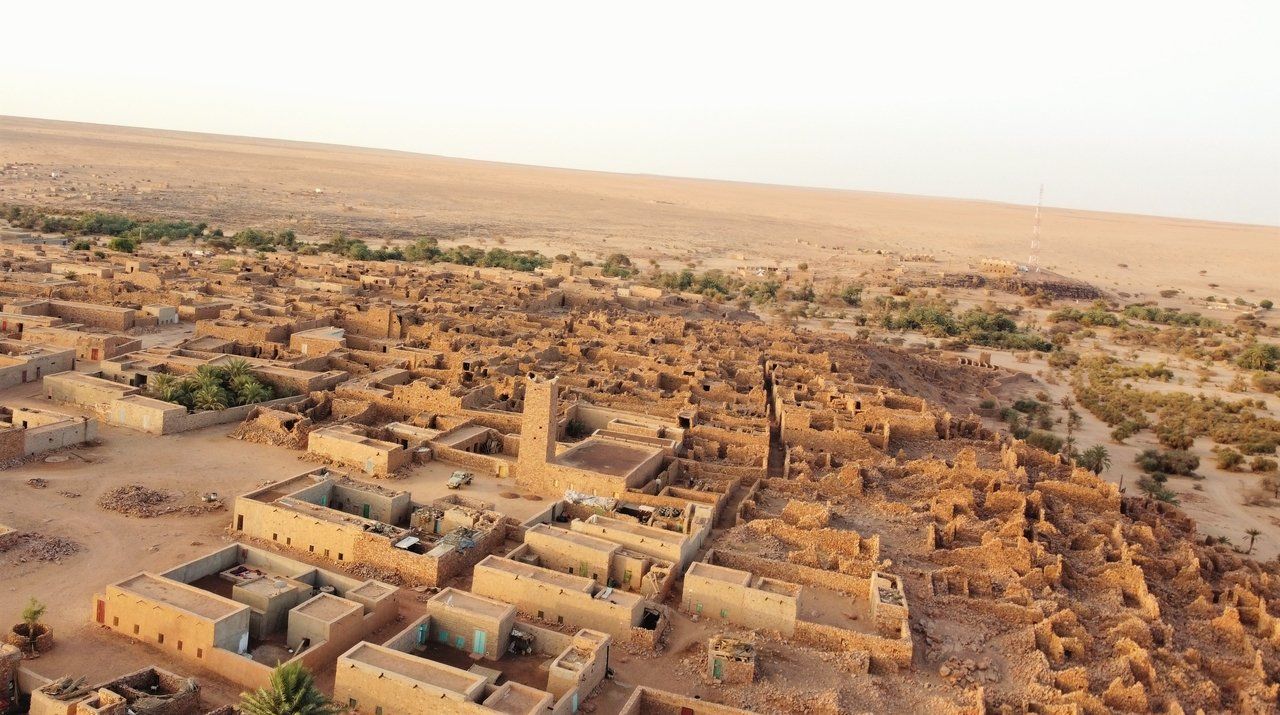 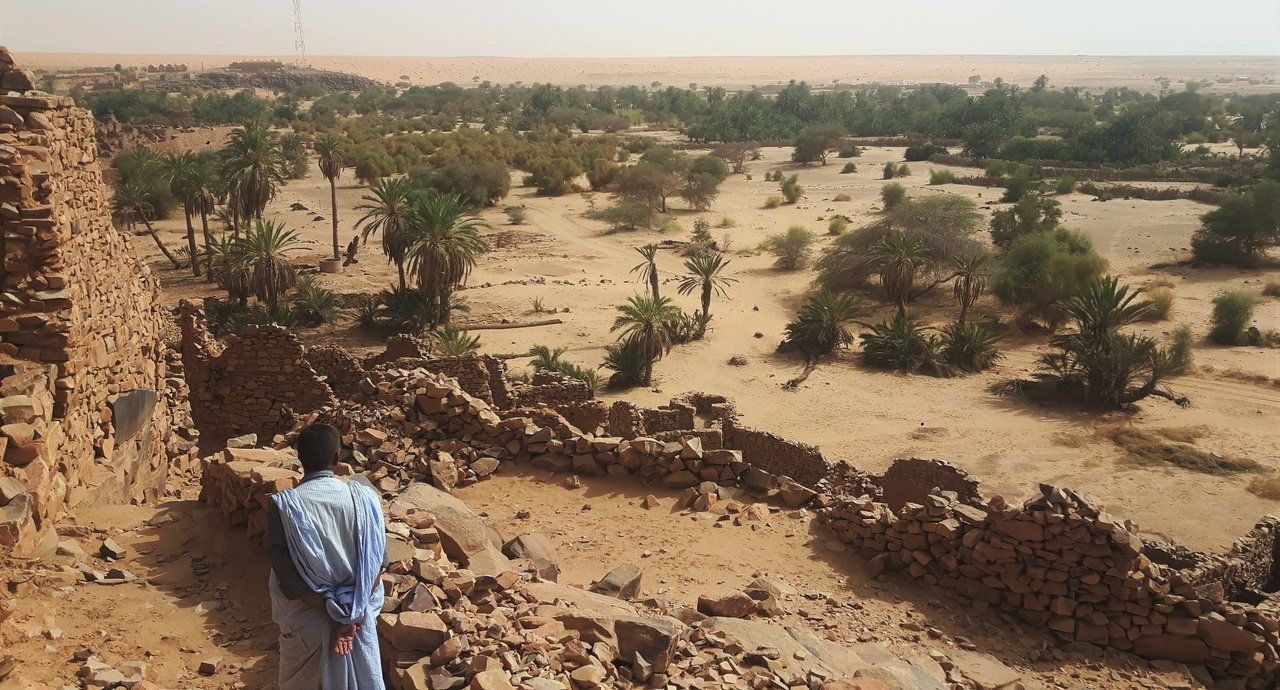 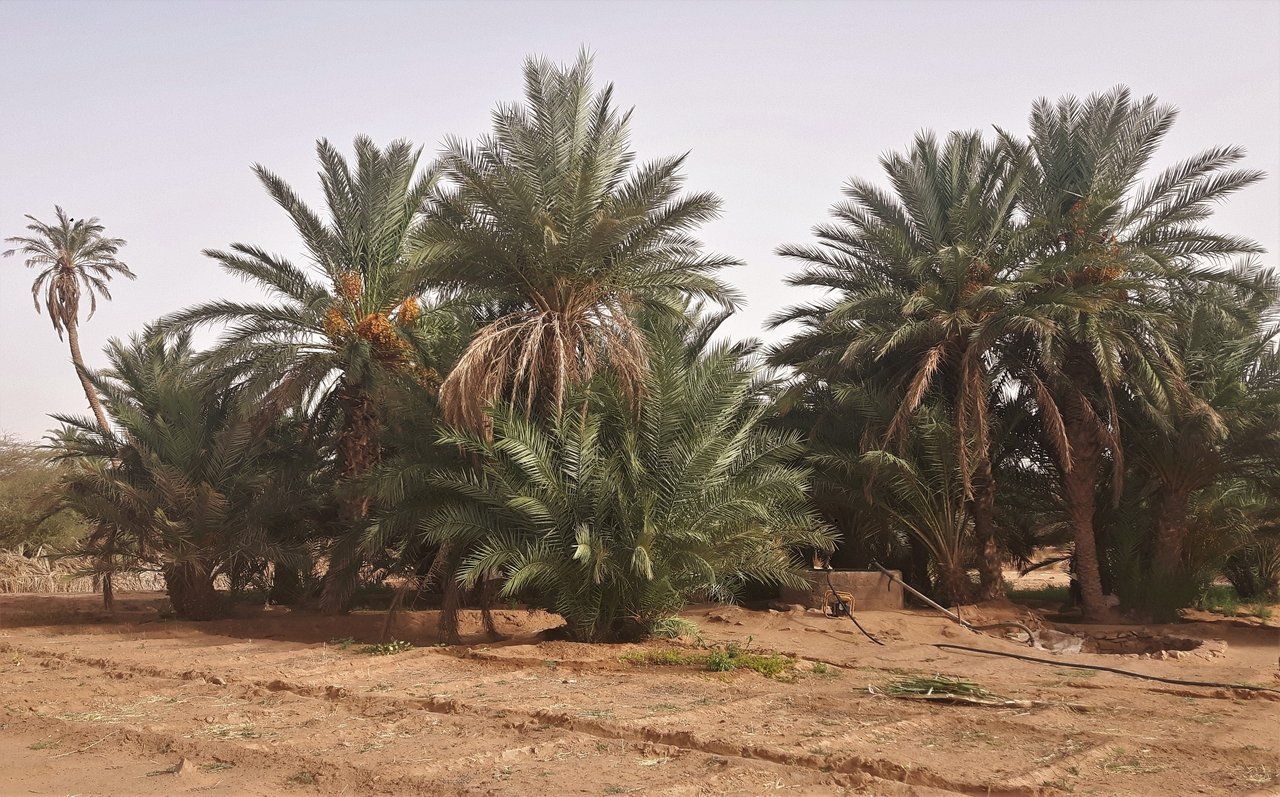 Forty sages and the Trans-Saharan trade

The Ouadane World Heritage Site begins at the foot of the eastern Adrar Plateau. The ksar was literally built into the rock. Ouadane is one of the most important destinations for visitors to Mauritania, so much so that the site is one of the usual and established todo's in the Adrar region, along with Chinguetti, Terjit, and a ride on the iron ore train. In its prime, the trading post was a major trade center in West Africa. According to legend, founded in the 12th century by three Hajj pilgrims, Ouadane remained part of the Trans-Sahara trade for many years. Gold was once exchanged here for dates and salt from the north.  The date, originally from Mesopotamia, could eventually be planted in the Adrar region and from then on contributed significantly to economic prosperity. Even today, the city of Ouadane is surrounded by date plantations. Although the town never attained the religious significance of Chinguetti, it was probably even more popular as a trading center - and much better protected. But knowledge was also taught in Ouadane, as evidenced by the name alone The Street of the Forty Sages, which was one of the main streets of the old city. Its dependence on trade, however, became the city's undoing. The caravan routes shifted eastward from the 16th century, and Ouadane became impoverished.

Today, Ouadane is all about its glorious history. The dimensions of the relatively well-preserved old town still amaze nowadays. Be it the mosque from the 15th century, be it the houses of the three Haǧǧāǧ (pilgrims) and city founders, or be it the city museum: in old Ouadane, history becomes walkable. The guide on site kindly answers all questions about the city. Books about the sights and history of the region are available for purchase on site. By the way, you are never alone in the old town: a colony of rock hyrax has nested there, even if you don't see them most of the time. If you walk down the hill from the modern city through the old town, you end up in one of the date groves and can taste the sweet harvest in season. In modern Ouadane today 3500 inhabitants live close to each other, on the whole plateau there are no broader streets. Walking directly through the modern adobe buildings after visiting the old town is an interesting feeling. Culinary, Ouadane is known for its wild melons, the seeds of which are popularly served crushed in a soup.

Only 25 km away from Ouadane is the Guilb er Richat. As described above, the kilometer-sized rock formation is visible even from the moon and serves as a landmark for orientation. The drive there is also an impressive experience, on which you may well meet passing nomads. Near the Guilb er Richat are also the remains of the Portuguese Fort Agouedir. We also offer camel tours from Ouadane. The destinations are variable and range from oases to the Guilb er Richat and even to Chinguetti.

Which roads lead to Ouadane?
Many. Starting from Atar, the most obvious would be to take the asphalt road to the east, passing Fort Saganne, Agrour and finally - with a slight detour - Chinguetti. From Chinguetti to Ouadane, besides the asphalt road, there is also an unpaved detour that offers the advantage of getting to know the Tanouchert oasis. The third option to drive from Atar to Ouadane is north of the Adrar plateau. Our Adrar Extended Tour offers just that: a detour via Jraif, El Beyyed, Bir Ziri, El Ghallaouiya and Trig Chouali that you definitely won´t forget!
If I have already seen Chinguetti, why should I visit Ouadane?
The old town of Ouadane is much more spacious than Chinguetti. You can literally walk through the ruins. Also, the fact that the place was carved into the rock is a fascinating sight and so not given in Chinguetti. Then you should not miss the nearby Guilb er Richat. These are just a few reasons to visit Ouadane.
How long is it worth staying in Ouadane?
We recommend a day trip including an overnight stay.