Clothing is one of the unifying elements of Mauritanian society. Whether in Nouakchott, Atar, Chinguetti or Oualata, men of all ethnicities and ages wear the boubou (also Arab. Derra'a). The wide and airy garment, which consists of pants and a top, is blue or white in most cases. Rarely, it happens that men of the Soudans also wear a boubou in black. It is not uncommon for a man to have more than one boubou at home, such as one for everyday wear and a more finely embroidered one for special occasions such as weddings. Boubous are also worn in other West African countries and there sometimes in other colors and even by women - in Mauritania, however, the classic boubou is blue or white and reserved for men. A female counterpart in Mauritania is the malahfa. These long, loose and airy garments look very shapeless and hide any curves. It happens that several malahfas are worn on top of each other. Certainly, this is also related to the so-called Mauritanian ideal of beauty of rather plump women, which, however, is no longer shared by everyone, especially nowadays. The malahfa is also worn loosely over the hair, a hijab in the Turkish sense is very rarely seen. 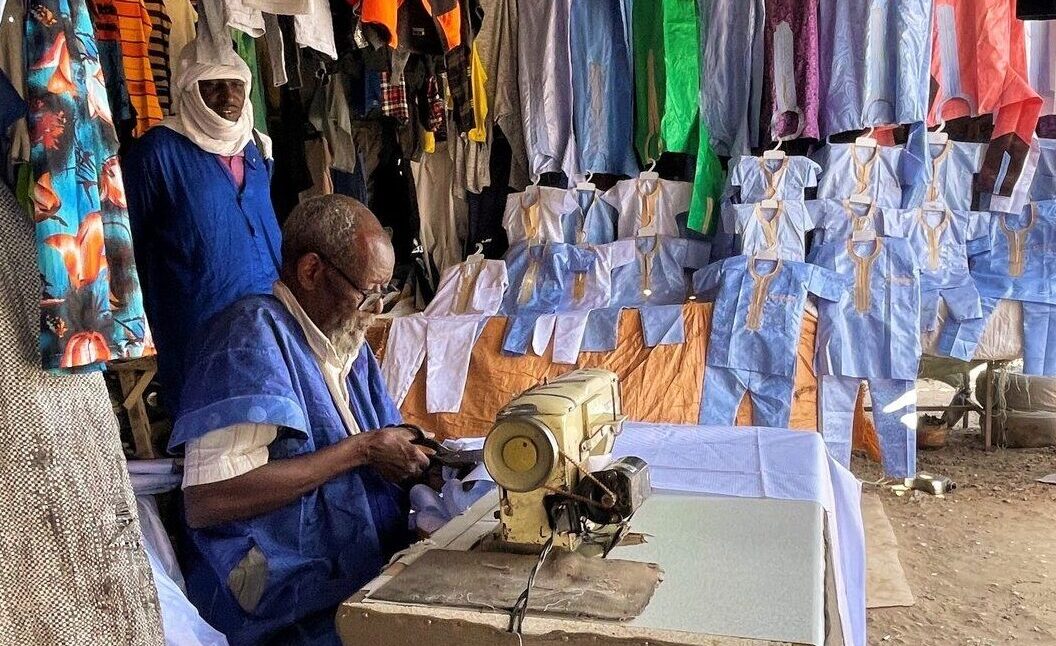 Black and Moorish women wear the Malahfa, the former, however, come in parts but also in quite modern clothing. Formfitting dresses or even some with cleavage is a taboo for Bidhani women. The cultural differences in terms of permissiveness are sometimes striking: For example, it is possible to see a Soudan woman breastfeeding her child uncovered on the streets of Nouakchott; a Bidhani, on the other hand, would probably only do so under her malahfa.
The most familiar head covering for men is the hauli (also hawli), the Mauritanian name for the Tagelmust. This protection from sun and sand is also black, white or blue and can be tied in different ways. It can be worn as a mere turban or additionally as a veil. Its length is up to 15 meters when rolled out. As in any other country in the world, the wearing of modern clothing is not exceptional in Mauritania. Men in suits, shirts, shirts and pants, women sometimes in jeans are a familiar sight, especially in the larger cities. By the way, in our FAQ we also give tips on what do's and don'ts you could take to heart yourself when it comes to clothing in Mauritania.

The most beautiful oasis

Terjit, located in the Adrar, is internationally appreciated as the most famous oasis in Mauritania. We have included the place with natural pool, date palms and bees in many tours of different lengths.
Learn more