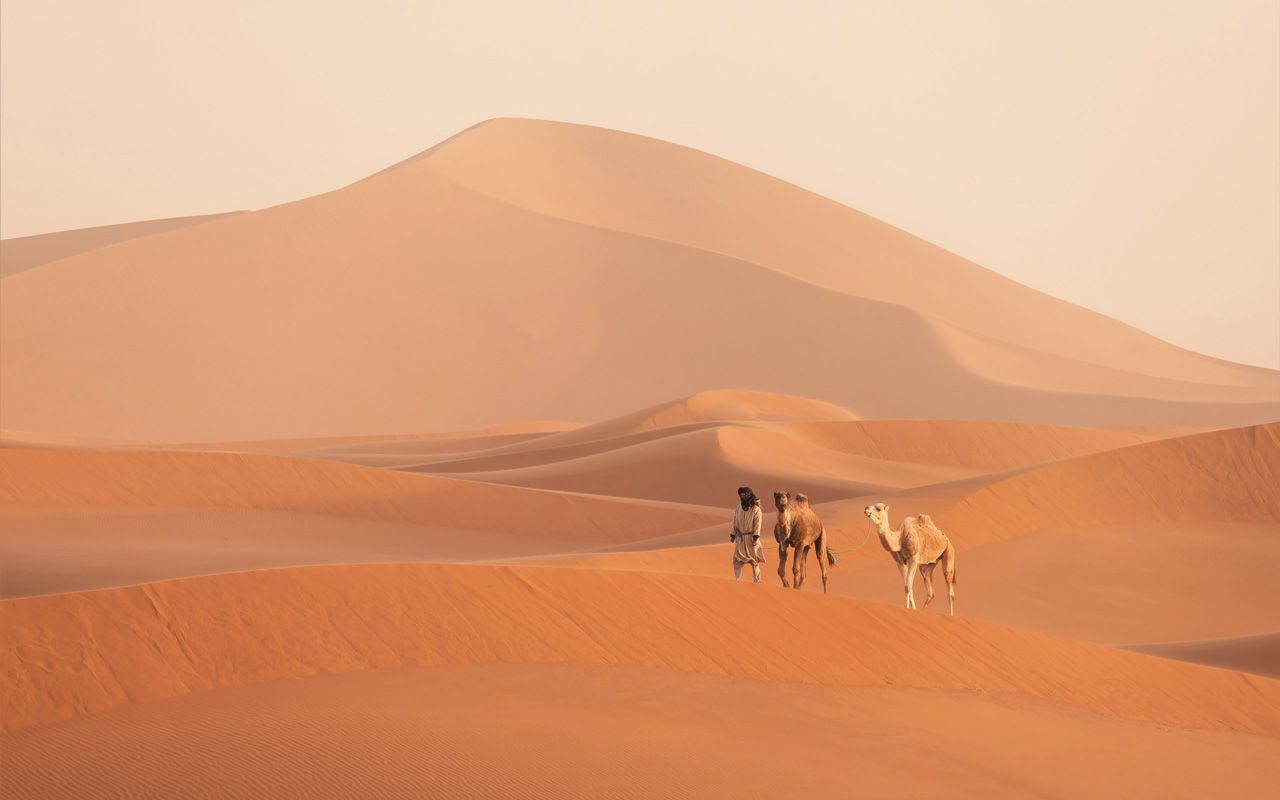 Three times the size of Germany, Mauritania consists of over 90% desert. There are Plenty of opportunities to travel a few kilometers on the ship of the desert in the Sahara. In addition to tea, Chinguetti, the singer Dimi Mint Abba, clothing such as boubou and hawli, and, of course, Sunni Islam, the camel (Arab. ǧamal) is a core factor in Mauritanian identity. Camels, or more precisely the one-humped dromedaries, originated in the Arabian Peninsula and were brought to West Africa at the latest with the expansion of Islam. For a long time, they were the only means of locomotion and transport. For centuries, the entire trans-Saharan trade was handled by camels. They transported salt, dates, gold and practically everything that was traded from one place to another. Even today, there is a salt caravan at Tichitt which travels south every year. Until a few decades ago, the Islamic pilgrimage, the Ḥaǧǧ, was also made from Mauritania by camel. It is said to have taken six months from Chinguetti to Mecca.

In addition, the camel also has another significance: their milk is drunk, the meat is consumed as a premium culinary dish, the skin is processed into leather. Now in Bilad Shinqit there are dromedaries in almost every village and countless places worth discovering by camel trekking. Tours can be organized flexibly in terms of time and place. A one hour ride on the beach of Nouakchott is possible as well as a trip of several days from Chinguetti to Ouadane. Whether the palm oasis of Terjit, the Ben Amira or the giant dune of Nouakane - we cover the most beautiful places of the country with our caravan. Even trips longer than a week can be realized. We integrate camel trips into our tour or plan a completely new one, which is oriented to your ideas. Two points are especially important to us. First: Animal welfare first. We pay strict attention to who we work with, how the dromedaries are treated and kept and what distance we can expect an animal to travel per day. Second, a desert tour can be exciting and fun, but should never be planned lightly. In any case, you are always equipped with a local guide and modern GPS devices. This way you won't miss anything and at the same time we make sure you don't miss us.

Unlike National Rail, we do not advertise comfort on this train trip. The train, which connects the iron mines of Zouérat in the north of Mauritania with the coastal metropolis of Nouadhibou, has passenger cars - usually only two - but also three to four American diesel-electric locomotives and up to 210 freight cars. It is the longest regularly running train in the world. The train mainly transports iron ore, but now also supplies Zouérat and F'dérik with water. It usually transports over 16 million tons of iron ore per year. There are three trains a day in each direction. We strongly recommend a trip from Choum towards Nouadhibou (400km), not the other way around. This is because there is a greater risk of getting hurt in an empty wagon. Moreover, it is better to drive at night if you do not want to be grilled. After all, it goes through the Sahara.

By the way, the train is by no means used only by tourists. Mauritanians also use this free travel option, often even with bag and baggage. Donkeys, goats and sometimes camels are occasionally transported. A train ride from Choum to Nouadhibou takes about 12 hours, crossing the territory of Western Sahara for a few kilometers. It is common that not every train from Zouerat stops in Choum, but always only the last one of the day, which arrives as scheduled around 6 am. Delays of 6 hours are not uncommon. For this purpose we offer accommodation in Choum, so that the waiting time can be spent in a relaxed way. In Nouadhibou we provide breakfast and shower immediately after the train ride.

The ride on the iron ore train is certainly a unique event in Mauritania and an incomparable experience for you. At least that's how it feels to ride the longest horse in the world through the Sahara. 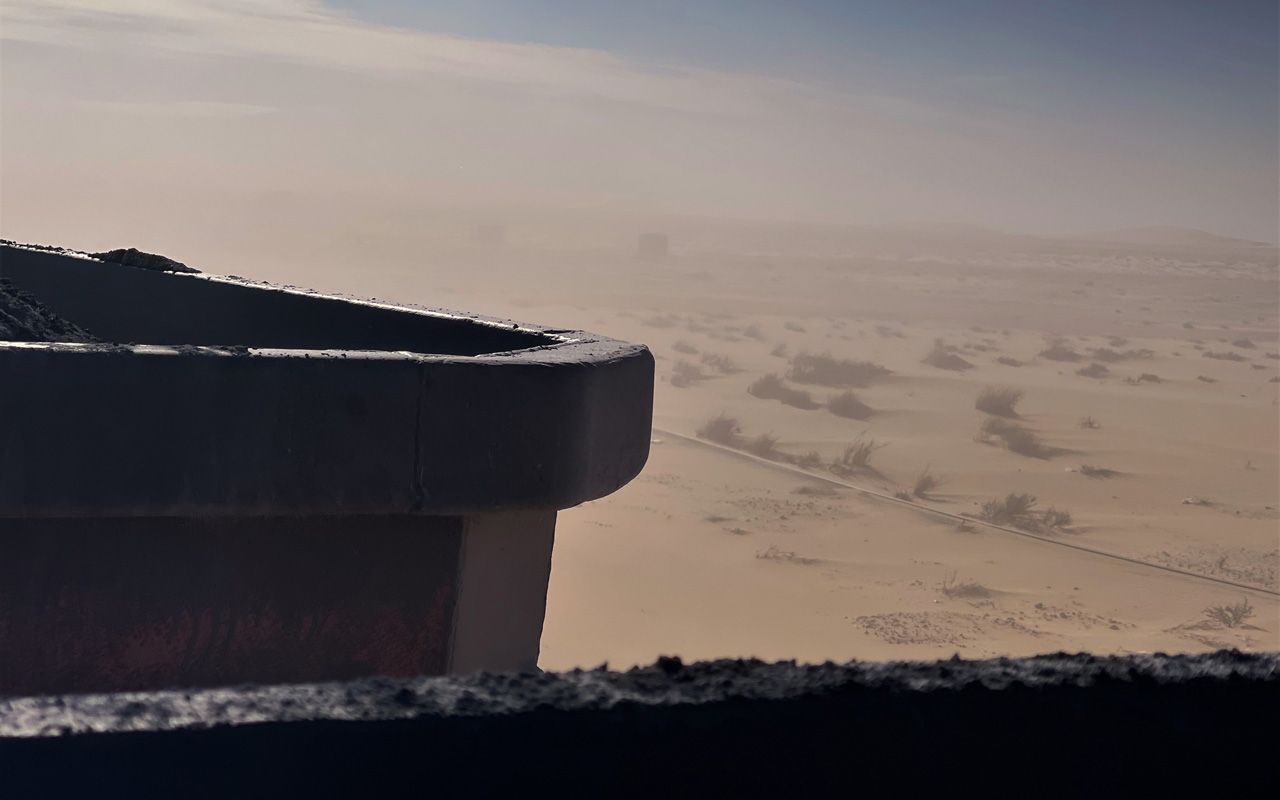 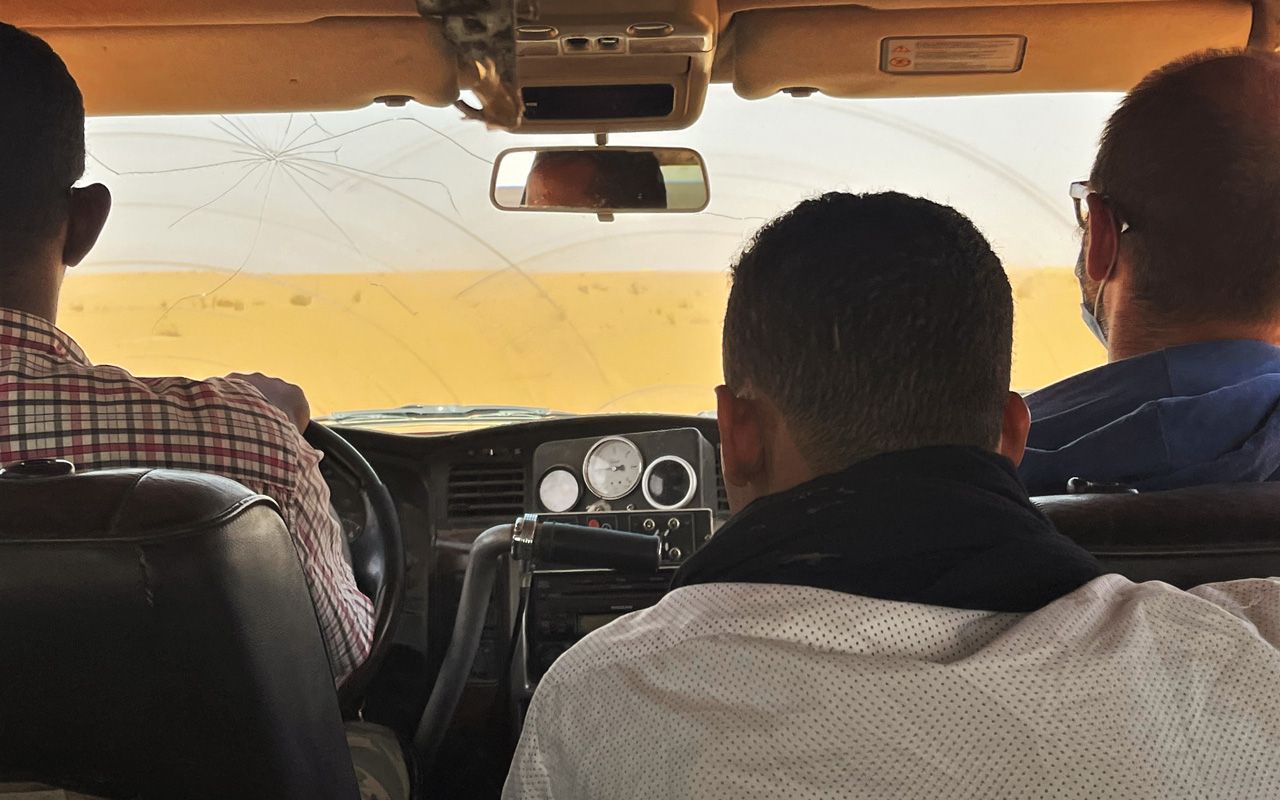 The great Arab poet Al-Mutanabbi once wrote: "The horse, the night and the desert know me." Other great literary figures also refer to the desert. Even the pre-Islamic Muʿallaqāt thematized the sea of sand again and again. So it's time for you to get to know the desert, too. And if you prefer horsepower instead of a dromedaries, the 4x4 tour seems just the right thing. Whether in the dawn, the glaring midday heat or the dusk doesn't matter. The Toyota HILUX is all-wheel drive and can do any time of day. And there is no shortage of suitable places for driving fun, after all Mauritania was the venue of the Dakar Rally from 1978 to 2007. Whether you make a desert tour an event in its own right or include this element on our larger tours is up to you. We are flexible.

The passenger seat bores you in the long run? Do you prefer to drive yourself? No problem. In Mauritania there are many possibilities to control your own four wheels in an action-packed way. The quad tours we offer start in Atar, Nouadhibou or Nouakchott. With the quad you are flexible. Whether at the seaside Ebbsandpiste of Banc d'Arguin or the dunes of Erg Amatlich in the Adrar, whether on the road or offroad. Whether a short adventure of several hours or a tour over several days - we have everything you need for your trip. You can easily add quad elements to an already existing tour; but there is also the possibility that we design a tailor-made quad tour for you. By the way, rubber on sand has a long tradition in Mauritania - from 1978 to 2007 the route Zouérat to Kiffa was part of the Dakar Rally. 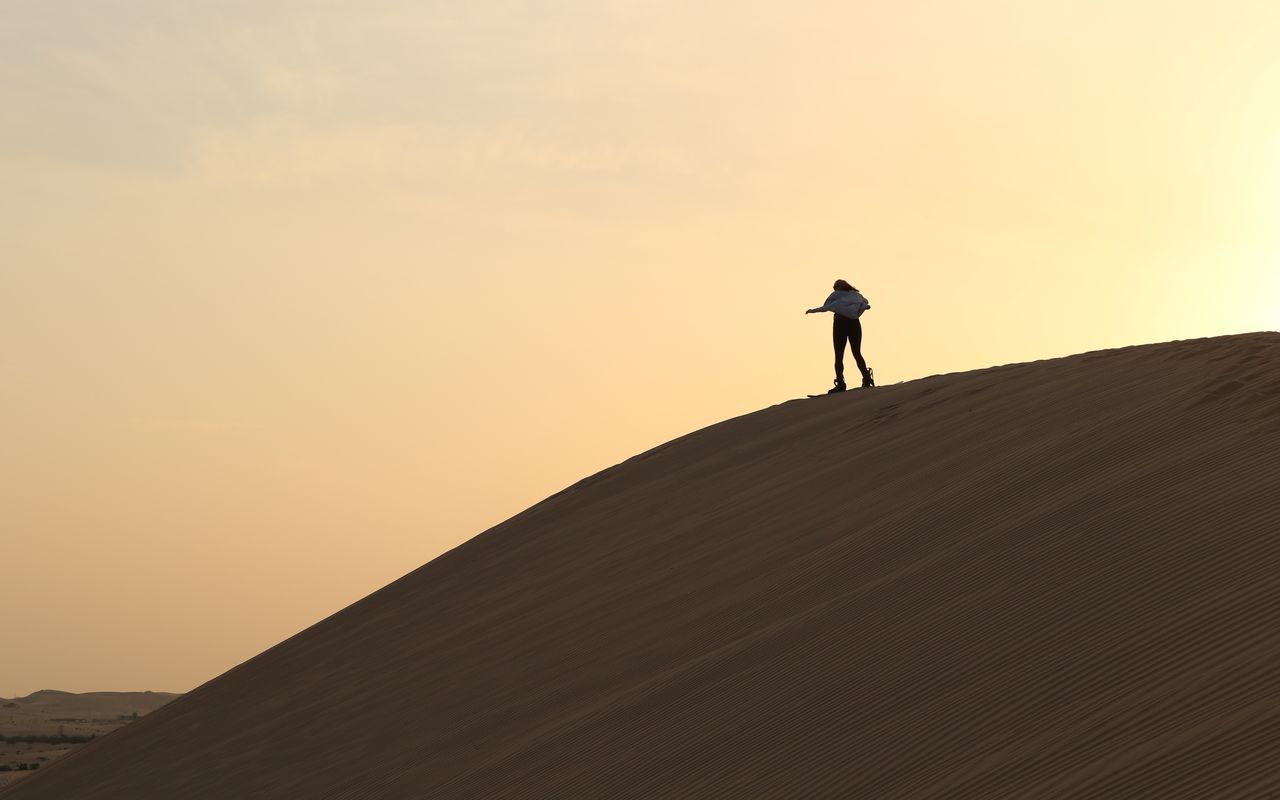 Like snowboarding, but on sand. What sounds a bit bizarre has been a recognized sport with its own world championship for decades. Ironically, it was held in Germany between 1990 and 2007, on the "Monte Kaolino" quartz sand dune in the Upper Palatinate. Whereas in Europe you still have to search for sandboarding spots, there is no shortage of them in the Sahara. Therefore we are flexible in the choice of the dune and can combine this sportive event with the most beautiful landscape panoramas. There are plenty of possibilities, for example near Nouakchott, in the Erg Amatlich or the Erg Ouarane near Chinguetti. In a country that consists of 90% desert climate, many sand hills can be climbed before it goes adventurously down again.

Tea culture is pronounced in Mauritania and closely linked to everyday life and identity, so much so that it is hard to believe that tea only spread to Bilad Shinqit at the end of the 19th century. Mauritanians drink tea everywhere - in the city, in the countryside, on the beach, in the desert and even in the oasis. The sweet national symbol is embedded in and stems from the tea culture of the Maghreb. Thus, green tea with plenty of sugar and nana mint is also drunk in Mauritania. All the main terms associated with tea are also borrowed from Moroccan Arabic. However, it was possible to develop its own character in preparation and enjoyment, which is certainly unparalleled in its artistry. To make a good tea is often socially assumed. And after all, it has to be learned. The taste, the sweetness, the foam - many things have to be taken into account.

Especially the right amount of foam demands some experience. The way the tea maker juggles with glasses and teapots has something of a barkeeper's touch. And, of course, nothing works if the charcoal isn't made to glow. Besides the craftsmanship, there are some conventions to follow as a teamaker. Who is offered the first jar? When do I take the glasses, clean them and prepare the next round? Drinking is always three rounds. An important Mauritanian proverb: "The first glass is bitter as life, the second strong as love, and the third gentle as death". Well, as I said, there are many things to consider. So why don't we go for it? Learn how to make tea the Mauritanian way. Whether on the beach, in the desert, or the courtyard of a house in Ouadane, we can make this tea school very spontaneous and almost anywhere. 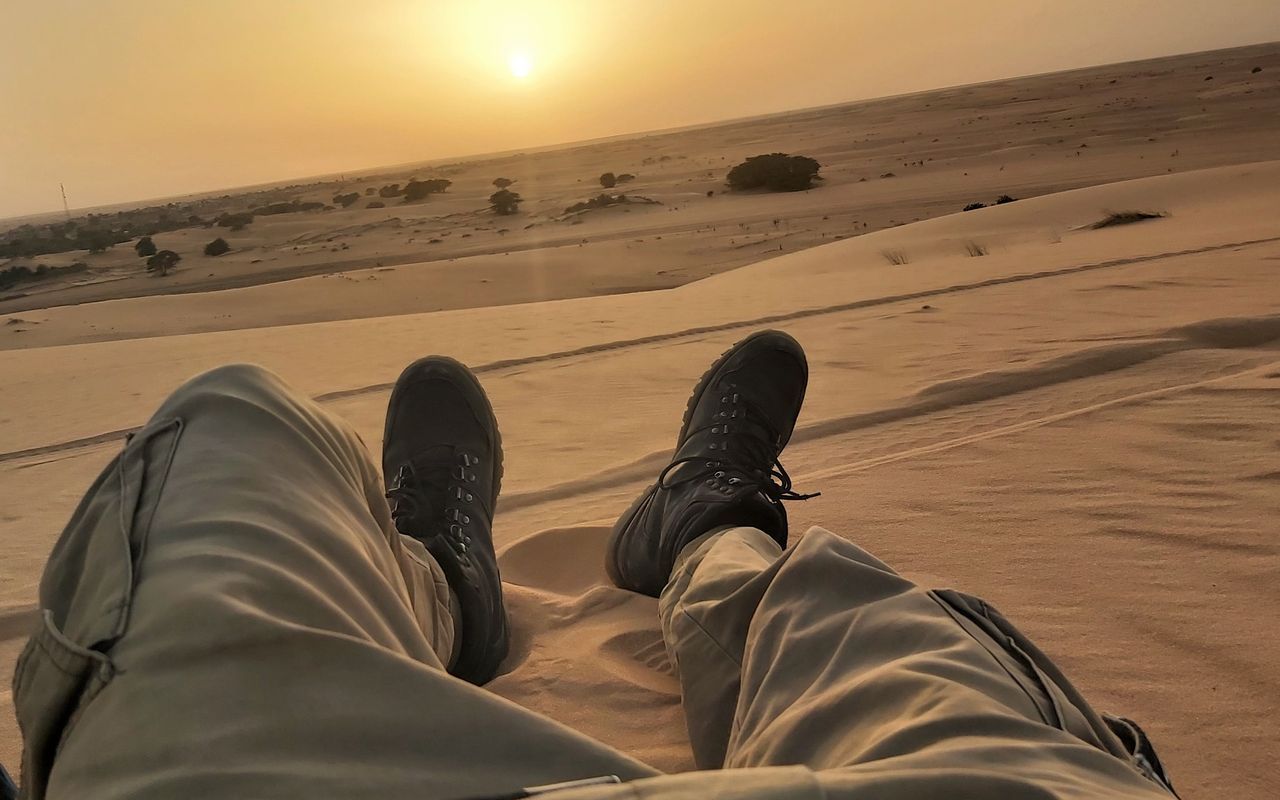 Dinner in the Desert

You can eat Mauritanian food anywhere in Mauritania. But in terms of the right atmosphere, the desert is unbeatable. Our Dinner in the Desert is possible all year round, only during Ramadan it even becomes a breaking of the fast for us, an Iftar. Mauritanian cuisine is fed by Maghrebi, Senegalese and French influences. Whether a fish dish like Maru Hout (also: Thiebouddiene), Maru Diuk (rice and chicken), couscous dishes, a Moroccan tajin or crêpe - for this dinner, variety is on the menu. Further on, appetizers and desserts are a nice addition. No need to mention that the preparation of Mauritanian tea will also be an important part of the evening excursion into the desert. No meal without tea! In the firelight and complete privacy you will get to know the beauty of the desert in the evening. But which sand dunes will ultimately form the setting, you decide. We can arrange our Dinner in the Desert in many places, e.g. in Nouakchott, Chinguetti, Ouadane, Oualata, Tichitt, Kiffa, Aleg. We will be happy to advise you on how to best incorporate the DitD into your tour.

Ouadane, located in the Adrar, is one of the most interesting spots in Mauritania. Especially its extremely spacious old town makes a visit an experience.
Read more